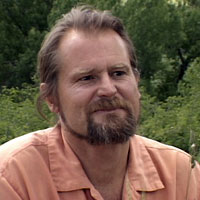 Corwin Bell, M.A., is an alchemist of art, science and storytelling. He has a relentless curiosity about the world, an inability to cease his research at the facile answer. His extraordinary creative and artistic vision pushes the limits of current media to transform people’s lives.

Corwin has over 20 years of experience in video, animation, graphics, multimedia production, and computer game design and is the Founder and Director at VisionShift Studios. Both of his most recent projects won awards at the Serious Play Conference (Seattle, 2011). Air Medic Sky One received both “Best in Show” and a gold medal, and VRDC (Virtual Remote Dome Controller) won a silver. Air Medic Sky One also won the “Best Serious Game” at the Serious Games Showcase at I/ITSEC (Orlando, 2011). These games take a completely original approach to patient safety (AMS1) and recovery from PTSD (VRDC) by integrating biofeedback technology with a completely immersive serious gaming platform.

Corwin’s previous experience includes the highly acclaimed Journey to Wild Divine and Wisdom Quest games. Utilizing his extensive knowledge of immersive training and simulated reality games, he created a self-care training program where players learn to regulate variable states of stress and relaxation and learn to optimize their overall health and wellness through the positive interaction with the biofeedback technology. (The first game in the series was released in 2003 and it is still selling on the market today.)

He earned his B.A. in Computer Graphics and Experimental Film from Evergreen State College (Olympia, WA) and his M.A. in Visual Communications from the University of Northern Colorado (Greeley, CO). As the Production Manager at Mammoth Micro Productions, his projects included The Pagemaster game for Turner Interactive. His work also includes feature film set design for the Discovery Channel, an NBC mini-series, an Asteroid TV movie and several TV commercials including Lexus, Ford, and Miller Beer. He also worked on multimedia projects for Oracle, Car and Driver Magazine and Harper Collins.

Corwin specializes and advocates a set of powerful but nimble techniques using small-budget tools to enable the filmmaker to create authentic media without relying on big budgets and corporate sponsorship. He shared this on-time, in-budget project philosophy with his students as a faculty member of the Art Institute of Colorado, where he taught courses on cinematography, video production and special FX, and 3D animation. In 2007, as Master Artist for the Museum of Outdoor Arts (Denver, CO) he completed a mixed-media installation entitled “Sacred Water” which was commissioned by the Museum of Outdoor Arts in Denver, Colorado. The installation required producing both a film and physical art objects, each informing the creation of the other, and all deriving from his interest in nature.

You will find him backpacking in the hills, rock-climbing, sea-kayaking or flying his Ultralight over the vast Colorado landscapes. 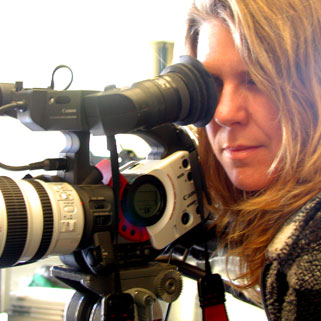 For over 14 years Karen has channeled her love for art, design and photography into the digital realm. She is an expert in developing interactive media, ranging from animation and video, to media-rich internet sites, to biofeedback training games. In addition to project management at VisionShift her responsibilities also include blue-screen filming and video compositing.

As Project Manager on the Wild Divine project she managed the core creative team as well as contract artists, actors, and musicians. She also coordinated creative content with technical programming, collaborated on the overall design, and created unique special effects and visuals. Karen graduated in 1990 from Ball State University with a major in Fine Arts and a minor in Photography. Soon after she became intrigued with digital interactive media which led to a second degree in 1997 from Denver's Colorado Institute of Art in Computer Animation. For Karen, not working means working to help the cause of the honeybee through active involvement in backyard beekeeping communities. 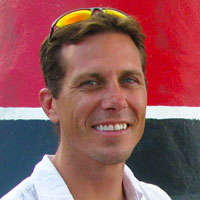 Bryan is a digital artist with a passion for pushing the boundaries of visual content. He has accumulated over nine years of experience working as a senior production and animation artist. After graduating from the Art Institute of Colorado with a B.A. in Media Arts and Animation, he went to work for the Wild Divine project where his skill in graphics and 3D software applications helped to bring the visual content to life.

At VisionShift Studios he has worked on all of our projects which have benefited enormously from his strengths in modeling and texturing, and from the overall environmental composition of his digital scenes. An integral member of the team, Bryan has contributed by integrating 3D workflow, graphic design and the post-production work of the visual content to form the unique visual design present in each project. Bryan specializes in using professional applications of Autodesk 3DS Max, Adobe After Effects, and Adobe Photoshop, and is currently honing his expertise in advanced lighting techniques for scene animation using both V-Ray and mental ray. A connoisseur of fine tea, he balances the calm with the speed of snowboarding.

Jan Delany is a proven software and problem-solving fanatic with over 15 years experience in programming and graphic design. Most recently he has worked on the game design and event programming for the award-winning Air Medic Sky 1 and VRDC projects. Jan is an integral part of the entire design and implementation process. He has a gift for simplifying and communicating the technically complex, and has a healthy obsession with user experience. His computer graphics background and his meticulous attention to detail are exemplified in his work as our surrogate Art Director and VisionShift’s quality control filter.

As part of the Wild Divine team, Jan developed the initial and primary software. He worked with the electronics engineer to ensure optimal performance of their custom biofeedback hardware, creating biofeedback analysis algorithms to drive gaming elements of the software. He was also responsible for managing contract programmers.

Jan has worked for multiple interactive media companies with clients such as BMW, Audi and BASF. Recently he has been working in the iOS world and has programmed several commercially available iPhone applications. Since doing undergraduate work at the University of Colorado Jan has specialized in languages and technologies including: Xcode, Objective-C / C, and AS3 – Flash / Flex. He is skilled in standard graphics programs and he has a firm grasp of database implementation software such as PHP and SQL. Git is his current favorite control system. When not working he is in a book, on a bike, or on the floor with his three-year-old.

Michael is the most recent addition to the VisionShift team. He originally worked at Mammoth Productions in 1993 with Corwin as Project Manger for The PageMaster. Most recently he successfully managed VisionShift Studios' two latest projects, VRDC and Secrets of Meditation. He assists in game design at VisionShift, and also produces storyboards and logic flow in addition to co-writing scripts.

Michael earned his Ph.D. in French Literature in 2010 from Emory University. His time in graduate school was split between a deep exploration of the seventeenth-century literary milieu and modern library work at the intersection of technology and teaching. He co-originated and managed the French Course Material Exchange project which continues to serve as the sharing source of undergraduate course content at Emory. He also designed, managed and began the implementation of Emory’s online, searchable French Revolution Pamphlet Collection.

Running, XC skiing and learning html are his most recent pursuits.